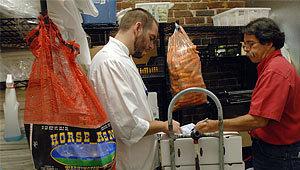 Again, his cell phone rings. You would think it was a produce crisis hotline. Could an heirloom eggplant be suffering a genetic defect? Or maybe some fava beans have lost their snap, their raison d'être?

No, it's a local seasonal chef on the line, which is akin to dealing with a meticulous cult priest.

And he's not happy.

Doesn't like this morning's delivery of salad mix. Seems the leaves are fatigued, lackluster.

Jim Mills listens. And nods his head. He is understanding, sympathetic, conciliatory. And apologetic. He'll sort out this box of disappointment. If necessary, replace it. Whatever the validity of the complaint, in Mills' perishable business, one rule thrives: The chef is always right.

Jim Mills was once a chef. And a very good one. For 25 years, Mills, who is now 59, healthy and happy (both conditions largely attributable to the fact that he's no longer a chef), worked for Randy Paragary, the last 14 years as head chef of 28th and N. He plated thousands of meals, worked with a brigade of chefs.

In 1999, tired of the grind, seeking greener pastures, he stashed his knives and changed careers.

Now he sells produce. No, the term "sales" doesn't quite do justice to what he does. Mills celebrates produce. He promotes produce. He is a produce evangelist. His is a one-man crusade to link grower with chef with consumer. His gospel is local, seasonal and, whenever possible, organic.

Moreover, if it grows, if it's edible, if it has succulence and flavor, he'll find it. He has food sources everywhere. Like a boar on the scent of a truffle, he's a forager extraordinaire. Though his name is not on the menu, if you've enjoyed a forkful of shaved fennel lately, or broccoli rapini, or sorrel petals, there's a good chance that Jim Mills helped usher its spring arrival to your table.

His hand is in a lot of salads. 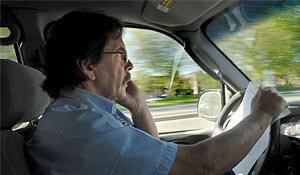 Now, on a gorgeous spring morning, Mills is behind the wheel of a white Ford 150 pickup. He's on the road to Guinda, in the heart of Capay Valley , which is the closest spot hereabouts to produce Elysium.

His destination is Riverdog Farms, which is a leading organic grower in Yolo County . It provides produce to such meccas of seasonality as Chez Panisse. Locally, you can find Riverdog at Whole Foods and the Natural Foods Co-op. But until Jim Mills established produce rapprochement last year, few restaurants in Sacramento had the option to carry Riverdog.

Mills is sales manager for Produce Express, which is in the Produce Market off Fifth Street . The company itself is a tasty story. It was begun in 1984 by Jim Boyce Jr., who started with one truck and a strong back. His warehouse was in his garage.

"He used to call me every day with his order," says Jim Boyce III, 40, who now runs the company. He's speaking of then-chef Mills. "One day, he asked me for a job. (Being a chef) is his greatest asset. He knows their side of the business. He knows how they can use the product and what it will taste like. And he has a great network of chefs out there."

"People are loyal to Jim Mills," says Kurt Spataro, executive chef for all Paragary properties, who once cooked alongside Mills. "Chefs consider him one of us. He understands kitchens, the restaurant business, and he knows the kind of service chefs want."

Then, as though referring to some food starlet, Spataro applauds, "And he discovered Suzanne Peabody."

Suzanne Peabody Ashworth is a renowned expert on seeds. A few years ago, she moved back to her grandparents' farm in east Yolo County to sell and propagate her rare seeds, and mind her own business. Then Jim Mills happened by. Well, let her tell the story.

"He drove down here one day and said, 'I hear you do weird things. I want to have some. We need to have this!' " she says.

"I looked at him and said, 'Who are you? And why are you standing in my field?' " She laughs, adding, "I would never have done this if not for Jim."

"This" is her growing enterprise, if not passion -- Del Rio Botanical. A now-75-acre organic farm, with six full-time employees, that raises upward of 150 items, from squash to chocolate mint, baby turnips to heirloom cherry tomatoes. Del Rio produce, highly prized, daily picked, is now featured in 60 restaurants in the Sacramento area, plus a few specialty groceries.

"I want to make a difference in how people connect with their food," says Peabody Ashworth, herself on a mission. The same could be said of Mills.

"He is Sacramento 's first forager," says Rick Mahan, owner- chef of The Waterboy. "He's constantly making contacts with new farmers. He'll show up at my back door every week with some new product in hand, and he'll say, 'Here, try this.' "

He's the link in local

Entering Esparto now, a farm town just a few miles from Riverdog, Mills slows to peruse its blink of a downtown. He's always on the make for a liquor-license posting, usually a sure sign of a restaurant opening, a potential customer for Produce Express.

His own yield is steady: one new customer a week, which attests to the vitality of the restaurant industry in the Sacramento area. Not all are fine-dining establishments, either. Mountain Mike's Pizza has a large account with Produce Express.

In looks and manner, Mills hasn't changed much from his chef days. His brown, shag-style hair is parted down the middle. He typically wears blue jeans and a Produce Express work shirt. He is calm, thoughtful, articulate but not florid about food. He listens. He's accommodating. He's not a glad-hander.

On a cold call, he knows when to enter a hot kitchen. "I know the nature of their day," Mills says. "I can walk into a kitchen, look at the chef's face, and know how he's feeling. You don't want to deal with a guy who's having a bad day and has a knife in his hand!"

Mills keeps up on restaurant trends, the latest food craze, local industry gossip. Mills knows when all the new restaurants are opening and who's hiring. "I run an employment service for chefs," he jokes. "I get them jobs. So chefs think, 'Hey, this guy got me a job. Maybe I better buy his lettuce!' "

Attending one such four-course lunch recently were Michael Fagnoni, 30, and Molly Hawks, 32, a husband-wife team who are opening Hawks in Granite Bay .

"We've always been about local grown," says Fagnoni. "There's a trend in seasonal and local, which I think is redefining what American cuisine is. It's no longer just meat and potatoes."

Mills is asked to select one product that underscores the virtues of local produce. He picks arugula grown by Del Rio . "The work is done for you," says Mills. "The chef doesn't have to do much. It's not like iceberg. It's fresh, dark green, with a tremendous amount of flavor. You taste it and you go 'Wow!' "

Del Rio arugula is used in restaurants all over. It's often identified by name on the menu. Like it was some kind of leafy celebrity. Indeed, more and more menus are rivaling films in their grateful screen credits: "pork by Bledsoe Ranch," "cheese by Humboldt Fog," "lamb by James Ranch ..."

Commenting on this literary trend of chef-grower collaboration is Patrick Mulvaney, owner-chef of Mulvaney's B&L, who says, "It's a way of sharing. This guy (farmer) really cares about what he's doing, about what he's growing. It's a way of honoring those people who put food on our table."

Ray Yeung is one such unsung hero. For 50 years, his family has quietly grown canning tomatoes in Yolo County.  A few years ago, at Mills' urging, Yeung put in 50 acres of heirlooms. Now, come late July and August, patrons of Mulvaney's will scan the seasonal menu and see a blurb for "Ray Yeung's tomatoes."

What does dusty, jean-clad Ray Yeung, a.k.a. "Rachael Ray," think of such VIP treatment?

"I had no clue I'd ever be on a menu," cries Yeung, sounding like a dark horse who just won an Oscar. "But I think it's good. It puts a name to a grower. It says that this (tomato) is not something that came from some foreign country."

All modesty aside, he boasts, "They (his Marvel Stripe heirlooms) are pretty good, I'll admit that."

And Mills? "He's a good guy," says Yeung. "He's doing a great job. A lot of these produce guys, all they care about is shelf life. Jim Mills cares about the consumer and the taste of the product."

Out On The Farms 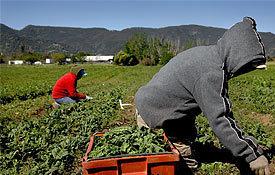 Jim Mills pulls into Riverdog Farms, which is a rural postcard. There's a packing shed, a sales trailer, rows of produce basking beneath an expansive blue sky. A sweet breeze carries the lament of roosters.

Riverdog was started in 1990. It's owned by a husband and wife, Tim Mueller and Trini Campbell, who are both in their late 30s. The dog featured in their farm logo is a black Labrador named Shadow, who used to romp in the river. Shadow is gone on, but there are new, frisky riverdogs in Buttercup and Thunder.

Today, Riverdog has about 200 acres under cultivation. Most of its restaurant market is in the Bay Area. Its sales manager is Brian Boyce (no relation to the owners of Produce Express). "We would like to sell to more Sacramento restaurants," says Boyce, who credits Mills' overtures and persistence. "We're not selling the volume we want to sell. So, we want more business going through Produce Express."

Mills takes a peek inside the packing shed. Mexican music blares from a radio. Workers are busy washing, sorting, boxing bunches of vegetables. Mills admires crates of savory spinach, baby romaine, green leaf lettuce, potatoes, and asparagus which sells at $78 for a 28-pound case. Organic produce is not cheap. Mills puts some boxes of chicory mix, arugula rabe and red rib dandelion in his pickup.

"It's a very good job," says Mills. "I'm outside. I see the sun move across the field. I'm not in the kitchen anymore, and I don't have to worry if the dishwasher shows up or not."

He has more time to spend with his family. He and his wife, Deborah George, a longtime art teacher at Sheldon High School , live in Elk Grove. They have a son, Zach, who is a junior at Christian Brothers. Mills says he still cooks occasionally and likes to tend a garden in his backyard.

The truck grows quiet. Mills peers out the window. Capay Valley is picturesque. But the serenity is short-lived. His cell phone rings again. And Mills has a long, involved conversation with a local chef, one of those suffering, artiste types, who needs a sack of white polenta. And needs it now!

"White polenta?" puzzles Mills, ending the call. Since it isn't green or leafy, polenta, white or otherwise, is not an item that Produce Express carries. Whatever. It's what the chef wants. Remember the rule.

Jim Mills will find it.