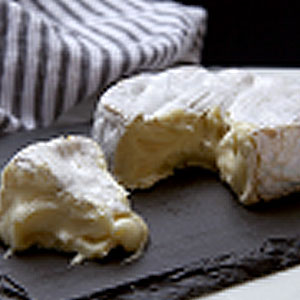 Complex, aromatic and creamy with a deep golden color and thin white rind. The flavor is robust with hints of mushroom. Camembert differs distinctly from Brie by the cultures used to produce Camembert’s authentic earthy flavor and flowing texture.

Makes a great addition to a cheese board but also has enough character to stand on its own. Consider using in warm sandwiches, salads, appetizers, pizzas, and charcuterie.

Marin French all started on a dairy farm.

1865. The Civil War was drawing to an end, railroads connected east and west, European immigrants were settling in Marin County to farm the lush coastal land.

And, at his West Marin dairy farm, Jefferson Thompson made deliciously fresh cheese using the milk from his dairy cows. Thompson would then ship it by schooner to the hungry dockworkers in San Francisco. He soon gained renown for his European style cheeses – soft-ripened Brie, Camembert and a simple treat called Breakfast Cheese – and founded a creamery that would eventually be known as Marin French Cheese.