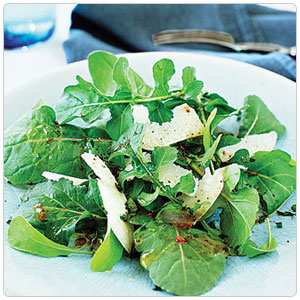 This delicious leafy plant enhances any salad with its peppery, spicy and tangy taste. Arugula's light to dark green, fleshy leaves resemble elongated oak leaves. Older arugula leaves will also have a much stronger flavor than newer ones; its flowers are edible when used as a garnish. When the plant matures it produces four-lobed white flowers with purple veins that are also peppery in flavor and equally edible.

Arugula is considered an herb, a salad green and even a leaf vegetable, making it a versatile ingredient in the kitchen. When arugula is grown as an herb it is often woodier and more strongly flavored. Add this variety of arugula to raw pesto and sauces where it's pungency will come through. Add whole leaves to grilled cheese sandwiches or a BLT. Use as a leafy bed for grilled seafood or vegetables.

Arugula is a flavorful plant that makes a great pizza topping added at the end of baking, and is simply delicious in salads and sandwiches.

Arugula is a member of the vast family of Brassicas (broccoli, cauliflower, kale, cabbage, turnips and much more) and closely related to radishes and watercress. Available year round, arugula usually appears as a small, leafy green characterized by its pungent and peppery flavor that can range from mild to intense depending on variety as well as season. Relatively unknown in America 15-20 years ago, arugula has long been used in Europe, where it is known as rucola in Italy, roquettte in France and rocket in England. The term wild arugula was previously used to distinguish the foraged variety from garden grown, is now used when referring to a smaller variety known for its intense flavor. The overall popularity of Mediterranean inspired foods in recent years has moved arugula from small Italian restaurants on the East Coast to a principal ingredient in salad mixes nationwide