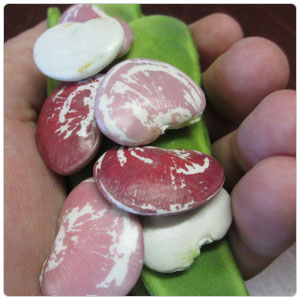 Speckled butter beans are a dinner staple throughout the southern United States. The creamier, nuttier cousin of the much lamented lima bean, they are the perfect match for a piping hot pan of corn bread and a steaming bowl of rice.

Shelling beans, unlike most produce, should be just a bit dried out when you buy them. Too green and too fresh and the beans inside aren't mature enough. Look for pods that while starting to dry a bit look freshly picked with a fresh and green stem end. As with most produce, chose shelling beans that feel heavy for their size. Bumpy pods with plump, fat beans inside are the ones to chose and will be the easiest to rip or pull open and then pop the beans out.