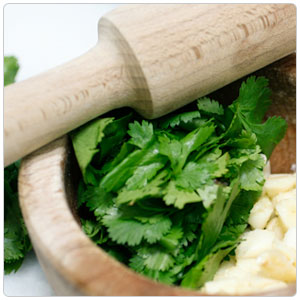 Although slightly resembling flat leaf parsley in appearance, and sometimes called Chinese parsley, cilantro can be distinguished by its unmistakable aroma and flavor. Cilantro offers citrus overtones with a clean, fresh flavor that can be bright, earthy and pungent. Cilantro is a common ingredient in Mexican and Asian cuisines.

All parts of the plant are used and each has its own distinct flavor. The seeds, known as Coriander, are reminiscent of orange peel, and are a common spice used in Indian cuisine.

Native to Southern Europe as well as the Middle and Far East, this ancient herb (a member of the carrot family), is the most commonly used herb in the world.