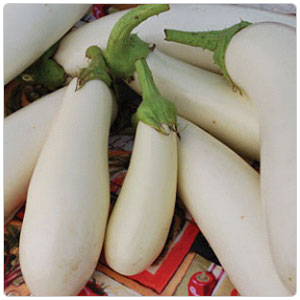 Eggplants are used in a variety of culinary techniques in cuisines around the world.  They are used as an ingredient of vegetable tempura in Japan.  They are stewed in the French dish ratatouille, mixed with beef or lamb and aromatics in the classic Greek dish moussaka.  Eggplants are roasted until the skin is charred and the creamy pulp is then blended with lemon, tahini and garlic for the Indian dish baba ghanoush.
They are also excellent in pizzas, pastas, summer vegetable ragouts, gratins and eggplant parmesan.

As a member of the nightshade family, eggplant was centuries overcoming the fear that it was as poisonous as its cousins. That is why it acquired the nickname "mad apple." And it is true that a very immature eggplant contains toxins that can make you sick and you should never eat the foliage. With origins many believe trace to ancient China, the eggplant traveled to Europe courtesy of the Moor invasion of the 6th Century.  But it was not until the 17th Century French Enlightenment that eggplant came into popularity, served pretty much as we eat it today. President Andrew Johnson claimed it as a favorite.