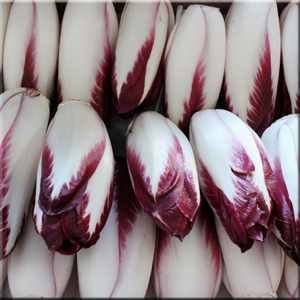 Red Endive is a cross between white endive and Treviso with closely wrapped leaves, a mildly bitter flavor and tender juicy texture.

Endive is grown in a 2-stage process– first in the light, then in the dark. Chicory seeds are sown in the spring producing a root the size of a large carrot by fall. Those roots are harvested from the field and then placed in dark, humid, “forcing” rooms to produce endives. Yes, endive is actually the second growth of a chicory root!

Use raw endive in salads and crudite platters, stuff them with cheeses, spreads and dried or fresh fruits as passed appetizers. Endive can also be grilled, roasted and braised to be served as a vegetable component to pork, poultry, & seafood.