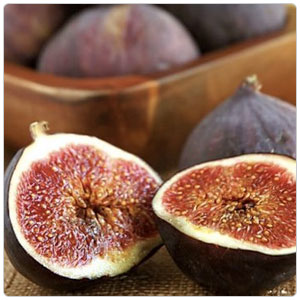 The most familiar variety with purple-black skin, contains jelly-like flesh that ranges from pale to dark pink with good flavor, often cracking near the stem end upon ripeness.

Fig trees produce two crops a year.  The first crop, called breba, arrives in late May-early June and produces larger fruit that comes from twigs grown at the end of the previous season.  Theses figs are short lived-the second crop develops on new growth from the current season and ripens in midsummer and lasts throughout the fall.  This crop is characterized by smaller fruit that is delicate, sweeter, and concentrated with flavor.

Use in appetizers, salads, meat and fish dishes, desserts, preserves and jams.  The leaves of a fig tree may be used to wrap fish and goat cheese to be baked or grilled.  Meats grilled over fig prunings, add another dimension of flavor.

Figs are an ancient fruit-they have been growing in Mediterranean countries for centuries and even longer in the area referred to as Mesopotamia, the center of ancient civilization.  The edible fig is one of the first plants to be cultivated by humans and has the distinction of being the most talked about fruit in the Bible.  Figs arrived in Californiavia Mexicoin the mid 18th century and were planted in mission gardens from San Diego to Sonoma, giving the varietal name Mission to the first dark purple California figs.  At one time in the early 20th century, fig orchards covered much of the area that is within the current  city limits of Fresno and today 90% of the commercial fig crop comes from the area around this San Joaquin Valley city.