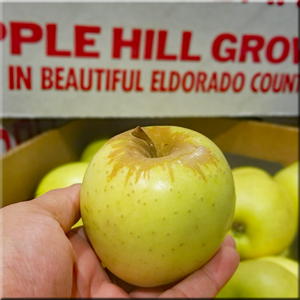 This multipurpose work horse can handle many preparations.  Good for eating out of hand and in salads as well as being cooked and used in tarts and pies.  Golden Delicious apples pair well with savory items as well and makes excellent apple sauce.

The variety was discovered by a West Virginia farmer at the end of the 19th century.  It is generally considered to be a seedling of Grimes Golden, to which it bears a strong resemblance.  The variety was soon taken up by the famous Stark Brothers nursery, who were so impressed by it that they bought the original tree and an area of land around it.  The tree lived on into the 1950s, by which time it had become firmly established as one of the world's great apple varieties.