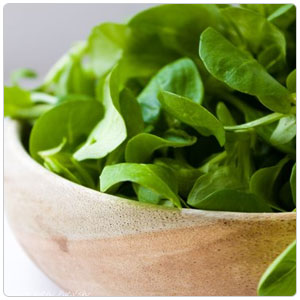 Mache is a tender salad green consisting of several rosettes of dark green spoon-shaped leaves attached to a common stem. It has a mild flavor reminiscent of sweet hazelnuts with a buttery, velvety texture. Another common name is lamb's tongue as it resembles the shape of the tongue of the lamb as well as being a food favorite of the flock.

Mache is at its best when used when lightly dressed with a viniagrette and used as a simple salad or combined with other lettuces as part of a composed salad.

Corn salad was originally foraged by European peasants until the royal gardener of King Louis XIV, de la Quintinie, introduced it to the world. It has also been used as food in Britain for many centuries and appears in John Gerard's Herbal of 1597 but only became commercially available there in the 1980s. It was grown commercially in London from the late 18th/early 19th century and appeared on markets as a winter vegetable. The common name corn salad refers to the fact that it often grows as a weed in wheat fields.