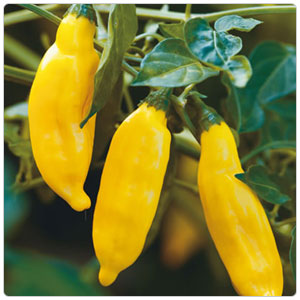 Native to South America, aji amarillo is a bright-orange, thick-fleshed chile with a medium to hot heat level which offers a lot of fruitiness for its heat. It's a different kind of fruitiness from other chiles like poblanos: less sharp and harsh, more full-bodied, and a lot more subtle and "comforting". 2500-5000 heat units.

Aji amarillo is most frequently made into sauces, either green or orange. The orange variety, thickened with dairy, mayonnaise, and/or some form of bread, is ladled on meat, poultry, fish, starches, beans, and vegetables.

In 1912 a chemists by the name of Wilbur Scoville, working for the Parke-Davis pharmaceutical company, developed a method to measure the heat level of chile peppers. The test is named after him, the "Scoville Organoleptic Test". It is a subjective dilution-taste procedure. In the original test, Wilbur blended pure ground Chiles with sugar-water and a panel of "testers" then sipped the solution, in increasingly diluted concentrations, until they reached the point that the liquid no longer burned their mouths. A number was then assigned to each chile pepper based on how much it needed to be diluted before they could no longer taste (feel) the heat. The pungency (or heat factor) of chile peppers is measured in multiples of 100 units. The sweet bell peppers at zero Scoville units to the mighty Naga Jolokia (Ghost Pepper), at a rating of 200,000 or more, indicating that their extract must be diluted over 200,000 times before the capsaicin presence is undetectable. The greatest weakness of the Scoville Organoleptic Test is its imprecision, because it relies on human subjectivity. Tasters taste only one sample per session..