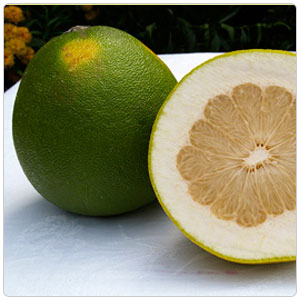 Pummelo aka Pommelo and Pomelo

The pummelo is a large oversized sweet, mild grapefruit, weighing 2-3 pounds each with thick skin, white flesh and tart flavor. It has very little, or none, of the common grapefruit's bitterness, but the pith around the segments is bitter.

Pummelos are great in salads or raw preparations. The peel is sometimes used to make marmalade, or is candied and sometimes dipped in chocolate. The peel of the pummelo is common in Chinese cuisine for flavoring, especially in sweet soup desserts.

Quite possibly the original variety of citrus from which many others sprang, the tangelo is a hybrid between the pummelo and the tangerine, it has a thicker skin than a tangerine and is less sweet. It has been suggested the orange is also a hybrid of the two fruits. Other pummelo hybrids include grapefruits and mandelos.