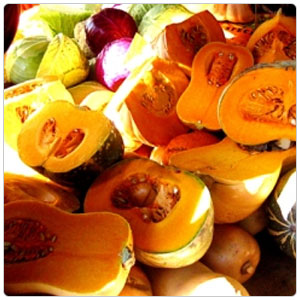 'Uncle Ray' learned of this variety from two Australian tourists who happened upon his pumpkin farm in 2010.  They said it was a very popular variety 'back home' and had not seen it here.  In Australian 'English', pumpkin refers to winter squash in general.  Ray ordered the seeds fromNew Zealandand has successfully grown it on his farm since 2011. Small, 3-4#,  rounded with grey-green mottled skin, deep yellow flesh and a distinct nutty flavor which he describes as 'better than all the rest'. Great roasted and mashed.

The heirloom varieties are used in the same manner as the more traditional varieties-baked or roasted for use in salads, soups, appetizers and desserts-but are distinct in that they are only available for a few months and using these varieties represents an effort to preserve  and prevent them from disappearing from the marketplace altogether.