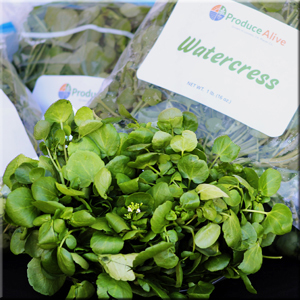 A member of the mustard family, Watercress is a succulent, leafy plant with a sweet, spicy flavor with a unique peppery taste.

We are proud to offer a local, hydroponically grown Watercress from Produce Alive n Loomis, CA (Placer County). Growing 100% hydroponically allows Erik to control the environment and guarantee consistency even with poor weather. He is able to grow year round in his 4,100 square foot green house, and he uses 90% less water than traditional growing methods. Hydroponic Watercress is a live product that continues to grow in the bag after harvesting. We are delighted to now offer this great Placer Grown product!

Use as part of a vibrant salad, pair with roasted meats, use to accompany salmon, scallops, and shrimp, puree into soups and sauces, use on sandwiches and pizzas.

This perennial, trailing plant, whose brittle soft shoots root in water and mud, grows wild in clear streams flowing through limestone formations. It is believed to be Eurasian in origin. Watercress was probably introduced to America in the 1600′s, and commercial production probably began in Europe during the 18th or 19th century, and has since spread throughout the world. Watercress contains a volatile mustard oil, with compounds similar to those in the radish, also of the mustard family.
Watercress is the richest natural source of a compound called phenylethylisothiocyanate, which gives the plant its unique peppery flavor and in a wide number of scientific studies has been shown to have powerful anti cancer properties. The name Nasturtium is derived from the Greek 'nasus', nose, and 'tortus', twisted, because of the peppery flavor of the species N. officinale. Watercress is entirely different from plants known by the colloquial name nasturtium, that are members of the nasturtium family.