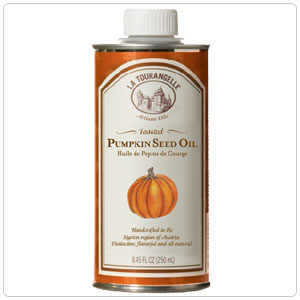 La Tourangelle brings you this Toasted Pumpkin Seed Oil from the Styria region of Austria, home to world's best pumpkin seeds. The process of extracting the oil has not changed for centuries. First, the best pumpkin seeds are toasted, then pressed in a hydraulic press. Following mechanical extraction, the oil is lightly filtered and bottled in a protective tin can to preserve freshness. Sold by the 250ml.

The written history of pumpkin seed oil begins with Christopher Columbus' voyages. Pumpkins and other squash were New World finds that Columbus's returning ships brought back to Europe. It is in the seventeen century that Pumpkin Seed Oil was produced for the first time from pumpkins grown exclusively in the Syrian region of Austria. The product became an instant success because of its amazing healing properties. It quickly became known as the Green Gold. So valued was this special oil, that a legal edict was declared in March 1773 by the Austrian Empress Maria Theresa stipulating that: "This healthy oil is unique and much too precious for using it in tasty meals and therefore should rather be used as a medicine. So it shall not be used as a culinary delicacy anymore but shall be collected and distributed only by the apothecaries." The main treatment use for pumpkin seed oil was in supporting the urinary and reproductive area of the body especially the prostate and enhancing the libido. Pumpkin Seed Oil has since become a staple of Austrian, Croatian and Slovenian cuisine.